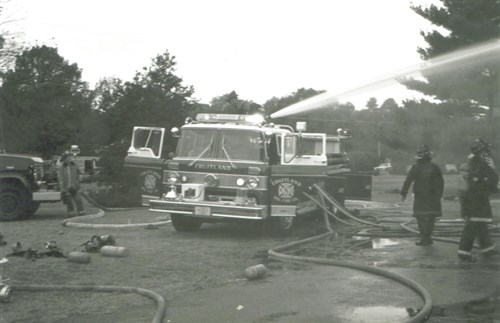 In 1909 James C. Palmer, Norman W. Carey, Norman Truitt, Leland Hobbs, and several other members of the Fruitland Community decided they wanted additional fire protection. They formed the Fruitland Vol. Fire Company and James C. Palmer was elected as the first Chief. They started by constructing their first piece of equipment, consisting of a double action pump (with a wooden gear and a two man handle), a 50 gallon barrel, several home made ladders, 2 ½ gallon buckets and 3/4” garden hose.

The first Fire House was constructed by the firemen on Red Bird Street (now known as Church Street). It was a frame building covered with galvanized tin.

In 1927 an American Fire Engine (second hand) was purchased for $1,500. This was a chain drive truck. They used the hose body to hold a “built” tank holding 300 gallons of water. 1 ½” hose was purchased. This was probably the first booster tank on the shore.

In 1937 the Fire Company was successful in purchasing a parcel of land on Main Street from the Pennsylvania Railroad Co.

On May 28, 1940 a group of women organized the Ladies Auxiliary of the Fruitland Vol. Fire Co.

In 1940 it was decided to build a new Fire House on Main Street. In December 1940, the first earth for the new building was turned and on February 6, 1941 the first brick was laid. The total cost of the building was approximately $8,000.00.

On December 8,1941 the Fire Company decided to increase their membership to 50 members.

On February 17, 1946 voted to install wire from fire house to Chief Palmer’s house, so that he can blow sire from home.

On December 15, 1956 voted to purchase a new siren as soon a possible.

In May of 1959 the first Scott air packs were received and training with their use was held on the property located at the corner of E. Main St and Division Street.

On October 26, 1964 the Company voted to buy a new fire engine. With the price not to exceed $20,000.00. On February 8, 1965 it was reported the new chassis had been delivered to Young Fire Equipment for completion of fire engine.

On May 11, 1979 voted to buy a new suburban from Oliphant Chevrolet.

On August 22, 1986 voted to purchase a 5 bottle cascade system for filling air tanks.

On April 20, 1987 voted to have up to 12 Fire Police (appointed by the Chief) and to be a member of the Wicomico County Fire Police Association.

On October 5, 1987 voted to purchase a utility truck from “Pierce”. Total price for truck was $51,900.00 and was placed in service in May, 1988. This truck was identified as “Squad 3” and was equipped with a “porta power” and some additional rescue tools.

In April, 1989 voted to spend up to $325,000.00 for new addition to building. Gladden Construction was low bidder and construction was started on June 19, 1989. This addition created approximately 7,500 square feet of additional space in fire house.

In September, 1991 received a surplus Dodge pickup (owned by Forest Dept.) and voted to spend up to $2,000 to fix pickup.

A “Chevrolet” suburban was purchased in 2001 and is used as a “Command” vehicle and for medical assist. This vehicle is identified as “Car 3”.

A 1987 “Chevrolet” pickup was prepared for fighting brush and woods fires and is identified as “Brush 3”.

A used 17 foot aluminum boat was purchased and was equipped with a 30 horsepower Mercury outboard motor and is identified as “Marine 3”. Ice suits were acquired to be used with this unit.

All bunker gear was replaced for the firemen in 2008 and leather boots were furnished.

In 2009 a F-350 Ford pickup was purchased and equipped with a “Trafcon” arrow board and other equipment for traffic control. This truck is identified as “Traffic 3”.